We’ve become incredibly adept at monitoring and anticipating natural phenomena — whether that be solar flares, rogue comets, or the movement of hurricanes in the deep ocean. But some especially deadly disasters have remained just out of scientists’ reach: earthquakes and subsequent tsunamis.

The study was published Thursday in the journal Science and shows how Google’s Curie telecommunications cables — which reach from California to Chile — can be used to detect small perturbations in the polarized light used to sling information through these cables. These perturbations correlate to quakes at the seafloor.

Why it matters — A key advantage of this new approach to earthquake and tsunami detection is it requires no extra equipment or modifications to collect this data from Curie, making this approach extremely low-cost and easy to implement immediately.

For now, Curie is a subsea cable that powers Google services like Gmail, Search, YouTube, and Google Cloud. It delivers 72 Tbs of bandwidth to South America. 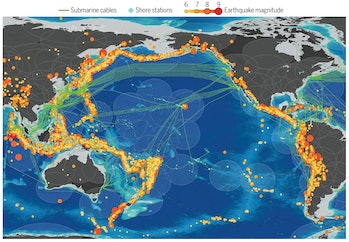 Here’s the background — When it comes to the inspiration behind this idea, the study’s first author and assistant professor of geophysics at the California Institute of Technology, Zhongwen Zhan, tells Inverse he was inspired when another detection idea came up dry.

He had been using Distributed Acoustic Sensing (DAS) to detect seismic activity on land but found this technology didn’t translate well into oceans because those communications cables didn’t have “dark,” or unused, fibers.

“When I tried to apply DAS to the oceans, one major challenge is that dark fibers are generally not available for those busy and expensive submarine cables,” Zhan explains to Inverse. “But during the discussions with submarine fiber engineers from Google, we started to realize that it might be possible to just use regular telecommunication signals to monitor earthquakes.”

Previous approaches to deep-sea seismic monitoring, like DART (Deep-ocean Assessment and Reporting of Tsunamis) buoys used to detect tsunamis, were both sparse and expensive. This new approach offered a solution that could be put to the test immediately.

“Conventional submarine geophysical instruments are very expensive to deploy and maintain, especially if they need to operate continuously for a long time,” Zhan says. “The approach we are proposing leverages pre-existing and widespread submarine fiber optic cables that were already deployed for telecommunication purposes.”

This way, scientists don’t need to add any equipment along the cable or at the fiber ends, Zhan explains. They simply need access to the polarization readings telecom operators are already measuring for monitoring purposes.

What they did — To test out their new idea, the team monitored the polarization of light coming through these cables between December 2019 and September 2020.

Because these cables are so deep in the ocean (with a max depth of nearly 20,000 feet) and are pretty regular temperatures, there is little that disturbs them, unlike telecommunication cables on land that can be disturbed by temperature changes or traffic.

As a result, even minute quakes can act like a pulled string on the cable and create a change in the light’s polarization that the team was able to connect with seismic activity.

Zhan also adds that because the team is not adding any additional equipment or sensors to these cables, there’s no risk of potential data tampering or theft.

“The polarization data describes the orientation of light waves and does not contain any sensitive information about the content of the communication,” explains Zhan. “Also we do not need to add any equipment to the telecom system that might disrupt the regular telecom operations. So it is a very safe approach.”

What they discovered — During their nine-month-long observation, the team was able to detect:

A sticking point though in the current approach is that changes in light polarization are not great for pinpointing exactly where these storm and quake events are taking place. This is something that the team hopes to improve with future iterations.

What’s next — In future iterations of this study, Zhan says they’re hoping to refine and improve several elements of their approach, including technology that will make it easier to pinpoint exactly where these deep-sea disturbances are happening.

“We hope to understand the source of noise, in order to reduce them in the future,” says Zhan.

The team also hopes hope the broader telecommunication industry will join the effort. One day, there could be a global network of submarine cables used as a vast earthquake and tsunami monitoring network.

“This will benefit both science and society,” Zhan says. “The technology is already there, without needs to modify their systems substantially.”

In today’s top story, one small purchasing choice when buying plastic can make a massive impact. But first, today marks the first time people were introduced to the concept of logging on.

Move aside, Mars. Scientists are now more prepared than ever to explore Earth’s very own final frontier: the deep ocean.