Consider the cuttlefish. According to new research, this cephalopod has a trick hidden up its tentacles — or rather, its large brain. It reveals one surprising aspect of this creature’s intelligence: self-control.

These findings may inform an ongoing scientific endeavor: understanding the evolution of intelligence.

What’s new — This marine mollusk, also known as Sepia officinalis, may (debatably) not be the cutest cephalopod in town, but it’s by far one of the most intriguing. Most famously, the cuttlefish can camouflage within its ocean surroundings, hiding from the unwanted attention of predators.

A study published Tuesday in the journal Proceedings of the Royal Society finds the cuttlefish can also demonstrate self-control by delaying gratification in order to snare higher-quality prey.

Lead author Alexandra Schnell, a researcher at the University of Cambridge, tells Inverse this finding was unexpected.

“Finding evidence for self-control in a cuttlefish, an invertebrate that diverged from the vertebrate lineage over 550 million years ago, is surprising,” Schnell says. 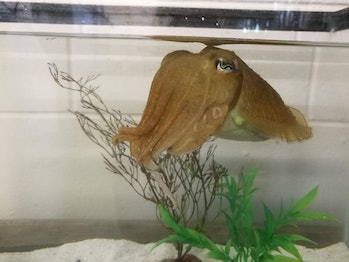 In the marshmallow test, Mischel tested pre-school-aged children’s willpower through a simple experiment: Researchers placed a marshmallow in front of the child. If the child could resist the temptation to consume the marshmallow for 15 minutes, they would get a second sweet treat. But if the child gave in too early, they got just the one treat.

The Stanford research highlighted the connections between self-control and certain cognitive skills. The researchers in this cuttlefish study drew upon this experiment for inspiration.

“We adapted the Stanford marshmallow test so that it was more cuttlefish ‘friendly,” Schnell says. 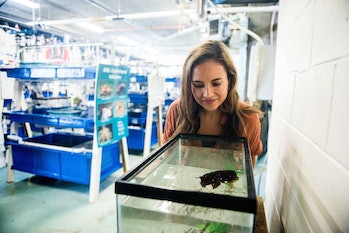 How they did it — Researchers trained, then tested cuttlefish in an experimental aquarium using two methods designed to evaluate whether the animal could learn to resist the short-term temptation to nibble on lower-quality food and ultimately hold out for higher-quality food.

Instead of marshmallows, the preferred treat was some live grass shrimp. The less preferred choice was a bit of raw king prawn.

The team also tested how long the cephalopods were willing to resist temptation by starting with a delay of 10 seconds. The delay was subsequently increased in 10-second time intervals.

The researchers came away with two main findings:

Why it matters — The new findings suggest a connection between self-control and learning in non-primate animals for the very first time.

The cuttlefish “showed comparable capacities for self-control to what we see in apes, corvids, and parrots,” Schnell says.

Previous research on the development of willpower — and its association with learning and intelligence — have mostly focused on humans and primates like chimps.

The reasons for the evolution of self-control in primates and humans are more straightforward, according to Schnell. These include delaying hunting so you can build tools for the future, strengthening social bonds, and living a longer life. 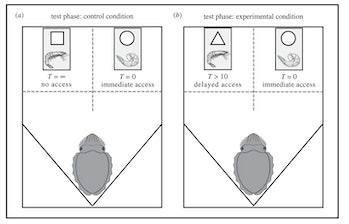 “However, apes, corvids, and parrots are long-lived and social and thus the benefits for self-control are obvious for these animals,” Schnell explains.

The evolution of self-control is not so clear in an invertebrate like the cuttlefish, which typically doesn’t live to see its third birthday.

“Consequently, our understanding of why self-control evolved has always been based on evolutionary pressures that are relevant to long-lived social species,” Schnell says.

Unlike non-human primates, the study speculates that cephalopods may have evolved self-control for a different reason: their eating habits.

Cuttlefish often remain camouflaged, hidden in one place for a long time. They have limited and sporadic opportunities to hunt for prey and forage in the wild. The ‘sit and wait’ nature of the cuttlefish may have increased its capacity for self-control.

“The ability to exert self-control might increase their foraging success because ambush attacks are likely to be more successful when cuttlefish are within close proximity to their prey,” researchers write in the study.

By establishing the capacity for self-control in cuttlefish, researchers are one step closer to unlocking the evolutionary origins of intelligence.

What’s next — While the results of the experiment are promising, we have a long way to go before we fully understand the evolution of self-control in animals — especially invertebrates like the cuttlefish.

Specifically, we don’t understand the behavioral mechanisms driving these behaviors. Why do cephalopods demonstrate self-control? And what does this capacity for self-control tell us about the evolution of intelligence in living beings?

These questions remain unanswered for now. Schnell says that this lack of knowledge stems from the limited, “largely neglected” research on self-control and other cognitive functions in invertebrate species.

Octopuses could serve as an appropriate subject for future research due to their unique foraging habits, in which “they move forward pause briefly, observe their surroundings, then typically change direction,” the study team writes.

“Efforts to expand the range of models species will help locate the origins of cognitive traits and also help us obtain a more comprehensive understanding of the evolution of intelligence,” Schnell says.

The microscopic roundworm, Caenorhabditis elegans, might be Earth’s secret superhero. These tube-shaped creatures, which thrive on rotting vegetation, may seem unremarkable at first glance. But this simple animal has benefited humanity in numerous ways.

Everyone from seasoned hedge fund managers to Redditors tries to predict which stocks will spike next. According to new research, they’re going about it all wrong.