On Saturday, Johnson & Johnson’s coronavirus vaccine was authorized for emergency use by the Food and Drug Administration.

The authorization brings the total count of approved vaccines available in the U.S. to three. And while we may not witness its influence right away, it will likely bring us one step closer toward herd immunity.

The Johnson & Johnson vaccine is 66 percent effective in preventing moderate to severe Covid-19. At first glance, that figure may seem low compared to Pfizer and Moderna’s efficacy rates, which both are above 94 percent. But this number alone doesn’t tell the whole story. Johnson & Johnson’s vaccine still has some standout features:

“Don’t overthink this,” advises William Schaffner, an expert in infectious diseases at Vanderbilt University Medical Center. “Get the vaccine that’s available to you as quickly as possible.”

Johnson & Johnson’s vaccine is a viral vector vaccine. To create it, scientists take another virus — in this case, an adenovirus — modify it so it can’t cause disease, and replace its genetic material with the instructions needed to make the coronavirus’ spike protein. The immune system then learns to recognize the spike protein on the real coronavirus.

The Pfizer and Moderna vaccines are mRNA vaccines, which means they simply have those instructions (which degrade over time) stabilized in a fatty envelope, rather than engineered into another non-infectious virus.

Schaffner calls the two approaches comparable. The adenovirus vaccine “ought to be able to be manufactured more quickly,” he says. However, that hasn’t proved to be the case so far.

The Pfizer and Moderna vaccines were tested before we were aware of viral variants, like the B.1.351 variant first detected in South Africa. The Johnson & Johnson vaccine was tested in a world rife with viral variants, which may be affecting its efficacy number.

It’s too early to know for sure how well the vaccine performs against viral variants. However, the vaccine has been more effective in some places compared to others.

Still, we can gauge the vaccine’s power by looking at protection against severe Covid-19, and deaths from the illness. In that case, there’s evidence that this vaccine is “in the same ballpark” as Pfizer and Moderna, says Schaffner. 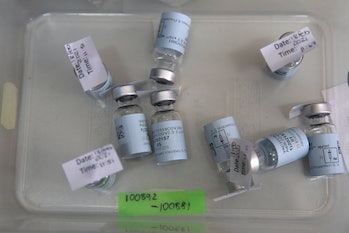 “The important thing is that in preventing the most serious disease, which is what these vaccines were designed to do,” Schaffner says.

No coronavirus vaccine is absolutely perfect. Perfection would involve preventing infection of any severity, in all people, all the time.

However, the data from the Johnson & Johnson vaccine, like other coronavirus vaccines, suggests it can turn an otherwise deadly illness into something manageable.

That said, there is some early data from a subset of Phase Three trial participants suggesting it might protect against asymptomatic infections – cases of Covid-19 with no symptoms.

To do this, the scientists looked at coronavirus antibodies in participants’ blood that would recognize a protein called the N protein. Antibodies wise to the N protein would be a sign of natural infection. Scientists can’t look for the antibodies that bind to the spike protein, since that’s what the vaccine hopefully imparts.

An addendum to the FDA briefing document shows results from 2,650 people who had received the vaccine. If scientists remove all people who showed symptoms, they found there were 10 people who got asymptomatic cases of Covid-19 in the vaccine group, and 37 in the placebo group. This is about a 74.2 percent efficacy rate for asymptomatic cases, per the addendum, but these are early results that should be interpreted with caution.

So far, says Schaffner, there are promising signs that all three vaccines may have an effect on the transmission of the virus. This means that once vaccinated, it might be harder to spread it to others.

But that the risk of transmission is “probably not zero,” ways Schaffner, which is why, for the time being, we’ll still be wearing masks after getting vaccinated.

Because of this, Schaffner says we might expect this vaccine to be more widely available in smaller clinics, doctor’s offices, or rural areas that are only equipped with regular refrigerators.

Lenient temperature requirements mean this vaccine may also sidestep a problem the other two have encountered so far. The fact that Moderna and Pfizer vaccines can only last for short periods of time at regular temperatures has led to happenstance vaccinations, where someone gets the vaccine before their priority group because the vaccine will expire unless used immediately.

Because Johnson & Johnson’s vaccine can be stored for far longer at regular refrigerator temperatures, it gives priority group members more time to get to the vaccine. Because of this, wasted vaccines “won’t be an issue with the Johnson & Johnson vaccine, or much less of an issue,” says Schaffner.

But not everyone will experience the Johnson & Johnson vaccine in the same way, much like other vaccines. While its protection was across age groups, its trial suggests a lower efficacy (42.3 percent) for individuals over the age of 60 with risk factors.

The vaccine’s protection was, overall, consistent across Black, Hispanic, and white volunteers.

What happens next? — A single-dose Covid-19 vaccine might prove to be a powerful tool, especially for people who are hesitant about vaccines. Right now, we’re vaccinating what Schaffner calls “early adopters” or people who are eager to get the vaccine. Eventually, we’ll reach the end of the vaccine line, where people may be more hesitant about it.

The promise of only having to receive one injection rather than two makes getting vaccinated an easier sell, bringing the quest for herd immunity one step closer. That’s one thing this vaccine can provide, that at this point, the others can’t.

“It’s ‘only one shot, don’t worry about it, it’s quick and easy,’ is a much better message,” Schaffner says.

Editor’s note: On 2/27 the article was updated to reflect the new status of the vaccine.

For the past year, the world has eagerly awaited the arrival of Covid-19 vaccines. From the start, it was clear that with this kind of highly transmissible virus an effective vaccine was our best bet for returning to something resembling normalcy.

One of the biggest barriers standing in the way of ending the pandemic isn’t medical or logistical. It’s the misinformation about the Covid-19 vaccines.

When France had its first wave of Covid-19 in February 2020, Nicolas Hoertel worried about his patients.

If we’re going to rely on Covid-19 vaccines to bring an end to the pandemic, we need to maximize their effects. But one thing that risks undermining their protectiveness is nutritional deficiency, particularly in the elderly.