Ben Allen wants to act on autonomous cars before it’s too late. The California state senator introduced a bill in December 2020 to spur legislators to think about policy changes before self-driving cars cover communities.

“If we don’t create a coordinated, well-thought-through policy, this could actually end up making things worse than they are,” Allen tells Inverse. Since 2014, the Democratic senator has represented the 26th district, which covers the Westside, Hollywood, and South Bay areas of Los Angeles County.

Allen is not alone in his efforts, he says: there’s even talk among Secretary of Transportation Pete Buttigieg’s team of a national task force.

Want to find out more about how policies could prepare roads for autonomous cars, how the industry has responded to Allen’s bill, and whether California is in danger of being left behind? Read the full interview, only in MUSK READS+. 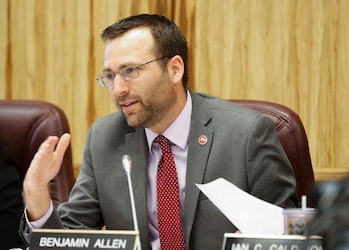 Firms like Waymo, Tesla, and Cruise Automation are developing self-driving car systems. Tesla started a beta of its autonomous driving software in October 2020. The current software requires the driver to maintain attention, but CEO Elon Musk suggested in December 2020 some jurisdictions could approve full self-driving next year.

Autonomous cars could improve mobility, but they could also increase traffic. Allen wants to avoid a repeat of the problems of the early 20th century, when legislators had to react to cars gaining traction on the roads after the fact.

One example is pollution. The city of Los Angeles had greater levels of photochemical air pollutants than any other American city in the late 20th century, according to a 2015 study in the New England of Journal Medicine. The study found eight in 100 15-year-olds in 1998 had serious lung defects, but thanks to air quality improvements, this dropped to three-and-a-half in 100 by 2011.

“With some advanced planning, maybe we could have headed off some of those worst impacts,” Allen says.

Allen’s bill, SB66, would introduce a council tasked with suggesting policies for an autonomous car future. While the bill is focused on California, Allen hopes that it could eventually fold into a broader federal effort.

The goal would be to work with the new Biden administration and allies in Congress to get a national task force together. Allen adds that “I know there’s talk about that right now actually, with some of [secretary of transportation Pete] Buttigieg’s folks.”

“I’m certainly hopeful that under the Biden administration, with this new Transportation Secretary — he’s a very thoughtful, young, dynamic, smart leader, Pete Buttigieg — that there will be progress at the federal level in planning,” Allen says.

TO CONTINUE READING THE FULL INTERVIEW, SUBSCRIBE TO MUSK READS+.

Here is what you will gain from subscribing to MUSK READS+:

MUSK READS+ is a fully independent operation. We are not Elon Musk, nor are we employed by him. Our job is to report the events we find newsworthy, giving you the inside look at the worlds of space rockets, electric cars, clean energy, and more. It means first-hand accounts of a SpaceX rocket launch, Tesla insights from third-party analysts, and more.

If you want to support us in our mission, and receive original interviews and analysis, consider contributing with a subscription.

Volkswagen takes on Tesla and Virgin Hyperloop’s pod is going on a trip. Who is the world’s richest person? It’s the free edition of Musk Reads #236 — subscribe now to receive two more editions later this week!

SpaceX CEO Elon Musk wants to go to Mars — and according to a recent set of terms and conditions, he may also want it to be a “free planet.”