The answer isn’t as simple as you might think.

For years food scientists have suspected that spices may serve an antimicrobial benefit in these countries, where foodborne illnesses are more common. However, a new study debunks this theory.

The study team examined 33,750 recipes from 70 cuisines containing 93 different spices in search of the true connection between spices and their cooks. What they discovered was an ever-deepening web of tangled, cultural correlations

Why it matters — While this study doesn’t present a clear finding itself, it does raise important questions about how often we conflate cultural correlation with causation and how solving these problems will take constant vigilance to deflect our own biases or assumptions.

The research was published Thursday in the journal Nature Human Behavior.

Here’s the background — When circumstances appear to magically align, like your crush reaching for the same yogurt cup as you, it’s easy to let your analytical guard down and imagine causation (e.g. it’s true love) where there is only a correlation (e.g. maybe they just also like yogurt). This is exactly what happened with food science and something called “Darwinian Gastronomy.”

Darwinian Gastronomy is the idea that our cuisine preferences and spices are driven by a stomach-led adaptation to our natural environment. Using this theory, it seems obvious that hot countries with higher levels of foodborne illness must be warding off illness with all the extra spices they add in comparison to cooler countries who tend to use fewer spices.

But Lindell Bromham, the study’s first author and professor of ecology and evolution at the Australian National University, argues this theory simply doesn’t hold up when you expand the datasets you’re looking at.

“The theory is that spicy foods helped people survive in hot climates where the risk of infection from food can have a big cost in terms of health and survival,” Bromham explained in a statement. “But we found that this theory doesn’t hold up.

“Spicier food is found in hotter countries, but our analysis provides no clear reason to believe that this is primarily a cultural adaptation to reducing infection risk from food.”

What they did — To examine what the true connection between spice and climate might be, the team explored over 33,000 recipes and 93 spices from across the world and for each type of cuisine looked at total spice use, mean spice use per recipe, and median spice use per recipe alongside a number of socioeconomic and environmental factors.

For the purpose of this study, the team defines a spice as “an ingredient added to a dish in relatively small quantities, primarily for flavor, color or smell, rather than for bulk, nutrition or pharmaceutical effects.”

Of the 93 spices they studied, their sample included those more common to the Western palate (like cinnamon or lemongrass) and those perhaps less-well-known outside their respective regions (like artemisia or epazote.)

What they discovered — Through their analysis, the team found many correlations that seemed like they could explain the presence of spicy food in warm countries, but they were far from causational.

For example, they found that the road accident prevalence was a better predictor of spice use than the prevalence of foodborne illnesses — an explanation Bromham points out as being unlikely.

“This doesn’t mean that spicy food shortens your life span or makes you crash your car,” explains Bromham. “Instead, there are many socioeconomic indicators that all scale together, and many of them also scale with spice use.” 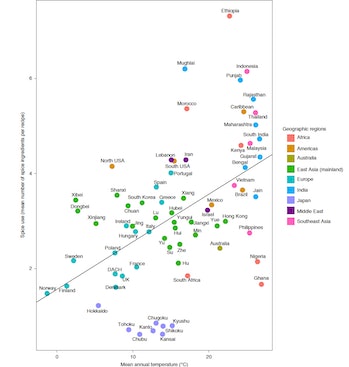 Other factors that appeared to demonstrate an explanation were:

But in the end, these explanations didn’t stick either. In particular, the argument that spicier cuisines were related to antimicrobial needs was debunked by finding little correlated evidence of other food additives, like alcohols or vinegar, in these regions.

“Spicier foods are not explained by variation in climate, human population density or cultural diversity,” said Bromham. “And patterns of spice use don’t seem to be driven by biodiversity, nor by the number of different crops grown, nor even by the number of spices growing naturally in the area.”

What’s next — Sometimes scientific questions lead to even more questions than they do answers, but this isn’t necessarily a bad thing.

In the future, the authors write that developing more sophisticated ways to look at these cultural questions will be essential to find a more accurate answer, as will including even more representative datasets with a less Euro-centric focus.

Only by accurately depicting, instead of simplifying, cultural diversity, can we hope to better understand it.

It’s time to shut down both the juice-cleansers and veggie haters in your life in one fell swoop.

Nothing says sophistication like pairing a glass of full-bodied, Cabernet Sauvignon with a roast loin of the finest Aberdeen Angus beef. But new research out of one of France’s most famous wine regions, Bordeaux, suggests pairing high-tannin red wines like Cabernet, Nebbiolo, or Syrah with a greasy hamburger tastes even better.