The zeitgeist has changed plenty since March 2020, the month many came to understand the concept of lockdown. Phrases like social distancing and flatten the curve evolved from abstract concepts to lived philosophies. Today, even the word pandemic is undergoing a shift, with Gen Z’s embracing of ‘panorama’ and ‘panini’ as brain-soothing alternatives.

Another entry in this glossary Zoom fatigue, a phrase of debatable origin to describe a sense of exhaustion spurred by using the video conferencing platform, Zoom.

Jeremy Bailenson, a professor of communication at Stanford University, tells me he had an “a-ha moment” a week into the shelter-in-place (another novel phrase turned mundane descriptor) period last March when he was speaking with a BBC reporter. She asked for a quote, scheduled a Zoom call, and 10 minutes in he “realized there was no reason to use video.”

He wrote an op-ed that was published a few days later in the Wall Street Journal. In the article, he describes a state of exhaustion driven by videoconferencing and “nonverbal overload.”

This week, Bailenson published the first peer-reviewed article deconstructing Zoom fatigue from a psychological perspective. In it, he discusses the four primary reasons video calls can exhaust you:

Bailenson knows what it’s like. He’s been hit by Zoom fatigue — especially early on in the pandemic. Since then, his “various work groups have evolved to develop norms to keep video off during a majority of our calls.”

Various aspects of the Zoom interface can lead to psychological consequences, he explains. Critically, observations and analysis up to this point are based on academic theory and research — not a study of Zoom users, although this is what he’s currently working on with collaborators. Zoom is the focus of his paper because of its ubiquity: It’s not the only offender, but it is the most well-known. 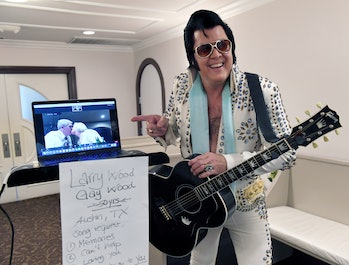 And like most technology that undergoes criticism, whether that’s texting or video games, it’s not the platform per se that drives harm — it’s how we use it and the cultural contexts that drive its use. The Zoom interface can be improved, but we also already have the liberty to make the experience better.

Bailenson writes that the four possible explanations for Zoom fatigue are “excessive amounts of close-up eye gaze, cognitive load, increased self-evaluation from staring at video of oneself, and constraints on physical mobility.”

Considering these drivers, he tells me that the first step you can take to combat Zoom fatigue is to right-click your video and “select hide self-view.” When you do this members of the meeting can see you, but you will no longer see the video of yourself.

“It will take a few days to get used to it — we have all gotten used to the check and balance of real-time nonverbal feedback — but you will feel better over time,” Bailenson says.

This advice is in response to the idea that seeing yourself during video chats is fatiguing. Previous studies suggest seeing a reflection of yourself causes you to be more critical of yourself, Bailenson explains. The mirror-like nature of Zoom simulates a similar experience, and in turn, can prompt negative emotional consequences.

The level of eye-contact via Zoom and the size of faces on our screens, meanwhile, triggers the brain to view the video call as an intense situation — putting you in a hyper-aroused state. To combat this Bailenson recommends taking Zoom out of the full-screen option and using an external keyboard to increase the distance between yourself and the screen.

He also recommends periodically choosing to take audio-only Zoom meetings as a way to allow yourself to move around during calls, and to decrease the cognitive load being viewed requires. Videoconferencing, Bailenson argues, transforms nonverbal communication. Natural reactions and cues become more performative and taxing — being watched and watching yourself drives overthinking, and the spending of “mental calories.”

What comes next — While anyone can take the steps recommended by Bailenson, it’s also on workplaces to create environments friendly to adjustments.

“Remember that bosses get to choose how often they want to Zoom versus call, and whether or not video is on or off,” Bailenson says.

“Employees don’t have the same luxury, and often are forced to spend time in the spotlight. As a manager, I didn’t realize this until my colleagues made it clear to me.”

Whether or not Zoom and resulting Zoom fatigue will be as ubiquitous as they are today next March remains to be seen. In December, Zoom had an average of 350 million daily meeting participants — in December 2019, that number was closer to 10 million. But its stock also dropped after news about the effectiveness of the Pfizer vaccine. The future is likely one where we can choose to use Zoom, but won’t have to.

Bailenson is still curious about how Zoom fatigue affects individuals in different ways. For example, he says “there is reason to predict Zoom fatigue is going to be worse for women than men.”

And we still don’t know if there will be any long-term consequences that accompany the positives platforms like Zoom have allowed. For all the fatigue, we’ve also been able to have Zoom birthdays, bar or bat mitzvahs, and weddings in a year where in-person gathering was often not an option. Zoom squares are often filled with faces you enjoy out in the real world — but it’s alright to sometimes give yourself a break.

Zoom is a great communications tool for staying in touch with work colleagues and friends, so it is worth trying the virtual backgrounds out.

The Motorola Edge+ is getting a new software experience called Ready For — turning the phone into a desktop computer and TV streaming device.

The Samsung Galaxy S21 Ultra’s industry-leading camera feature is coming to other smartphones, though it’s unclear at this time which ones.

In addition to confirming the launch date, OnePlus provided a sneak peek of the OnePlus 9 Pro smartphone and its Hasselblad camera setup.