In a new study, a team of paleontologists analyzed tooth samples found in Montana and determined plesiadapiforms, an ancient taxon including primates’ oldest ancestor, likely emerged 65.9 million-years-ago and lived alongside dinosaurs.

Why it matters — When it comes to understanding the deep history of primates — and eventually humans — this discovery could be huge because it suggests to scientists that this early mammal was thriving before and after the great extinction of dinosaurs.

The research was published Wednesday in the journal Royal Society Open Science.

Gregory Wilson Mantilla is a co-lead author on the study and University of Washington Biology professor. He explained in a statement that these new findings could completely transform how we imagine these ancient mammals.

“It’s mind-blowing to think of our earliest archaic primate ancestors, they were some of the first mammals to diversify in this new post-mass extinction world, taking advantage of the fruits and insects up in the forest canopy,” Wilson Mantilla said. 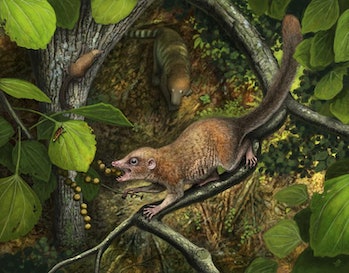 Prior to this discovery, the oldest known primate fossil to date was a fossil discovered in China in 2013 that dates back 55-million-years. This tiny, lemur-like mammal called the Archicebus achilles would have lived during the Eocene — a period of history that would have missed the original heyday of the dinosaurs by several million years.

The age of these new fossils places them right between the Late Cretaceous period and Paleocene, which means they actually existed toe-to-toe with dinosaurs like the Tyrannosaurus Rex.

But before Wilson Mantilla and colleagues could come to this conclusion, they had to first study the fossils themselves. In this case, a collection of molars.

What they did — The team studied five different molars recovered from a site in northwestern Montana now housed in the University of California Museum of Paleontology.

After dusting off these dental samples, they were placed in a 3D X-ray machine to create computer models that the team could more easily study without potentially damaging the ancient fossils. When looking at these 3D renderings, the team was particularly interested in what the differences between the shape of these teeth could tell them about the diets of the mammals they belonged to.

What they discovered — In addition to the dating of these fossils placing them as nearly 66 million-years-old, the researchers observed some important differences between the tooth samples.

While both were members of the genus Purgatorius, the team realized through examining the shape of a few of the tooth samples that the teeth belonged not just to Purgatorius janisae, a well-studied species of Purgatorius, but to a new taxon altogether.

This new taxon was named Purgatorius mckeeveri after Frank McKeever, who was one of the first residents of the area of Montana where the fossils were discovered. 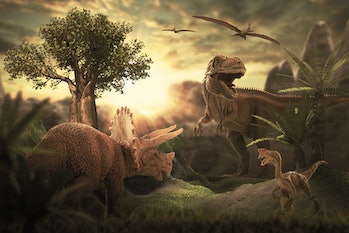 Because of the differences in molar shape between these two taxa, the researchers speculate that P. mckeeveri and P. janisae may have developed specialized, omnivorous tastes for food in the region. In particular, P. mckeeveri‘s molars were a little more rounded while P. janisae‘s were a little sharper.

“We posit that such dental features for omnivory coupled with postcranial specializations for arboreality led to the rapid evolutionary success of the plesiadapiforms,” the team writes.

What it means — Stephen Chester is a co-lead author on this study and an assistant professor at Brooklyn College. He said in a statement that finding not only one ancient taxon but two distinct ones from this far back in history gives researchers an important glimpse into how these mammals survived and thrived in ancient times.

“This discovery is exciting because it represents the oldest dated occurrence of archaic primates in the fossil record,” Chester said.

“It adds to our understanding of how the earliest primates separated themselves from their competitors following the demise of the dinosaurs.”

Scientists have found another piece in the puzzle of how echolocation evolved in bats, moving closer to solving a decades-long evolutionary mystery.

Scientists looking for some of the first galaxies in the early universe made a surprise discovery: a more powerful than expected active galaxy spewing a jet of material near the speed of light.