In an interview with Inverse conducted in late January, she recalled how, despite all her training to prepare her for this great endeavor, she was still dumbstruck.

“First you try to process it, taking it all in and trying to think: ‘Okay is this real? Am I just dreaming this?'” Mann tells Inverse. 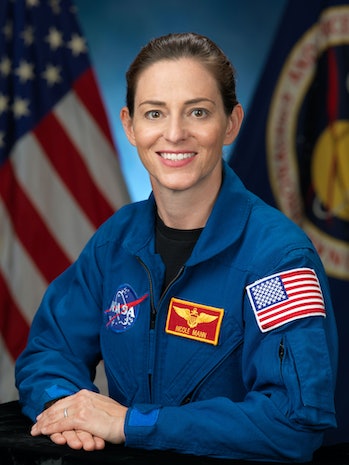 “It’s just that sense of incredible excitement and just thinking about all the possibilities, and thinking, ‘Oh my gosh I have so much work to do.’ Then it’s back to excitement again.”

Since the news broke, the 43-year-old NASA astronaut has been in an intense training regime along side 18 other candidates selected as part of the Artemis Team. Of the 18, only two will ever actually make it to the Moon and retread Armstrong and Aldrin’s steps on the lunar surface.

If Mann makes the cut, she would be the first woman on the Moon.

“It’s just this really overwhelming sense of emotion in the best of ways that I can describe,” she says.

As the pandemic raged here on Earth, NASA continued its plans to send humans off the planet and on to our natural satellite. On December 9, 2020, NASA revealed the 18 astronauts for their Artemis mission, which will land the next man and the first woman on the Moon by 2024. 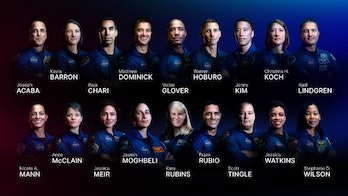 One noticeable difference between the Artemis Team and those who took part in NASA’s earlier mission to the Moon, the Apollo Program, is the sheer diversity of the astronauts. Of the 18 potential astronauts, 9 are women, including Mann — 12 men have already walked on the Moon as part of past NASA missions.

“It’s just a great example that our country needs right now to show that these barriers are being knocked down,” Mann says. “Anyone and everyone has the ability to participate and be a part of these amazing endeavors, whether that be something in science and technology, or something in society, or something as incredible as going to the Moon.”

“I didn’t realize that that was what I wanted to do until a little bit later in my career,” she says.

Before she made the switch, Mann was a lieutenant colonel in the Marine Corps. Flying to space was just not really on her agenda, until she visited NASA as part of her training in test pilot school. After this brush with the space agency, she started to look more closely at becoming an astronaut herself.

“I got a chance to meet astronauts and really get a better sense of what do astronauts do on a daily basis other than go to space,” Mann says.

“It’s a huge team working together for this goal which is so much bigger than yourself, and that’s what really drew me towards NASA.” 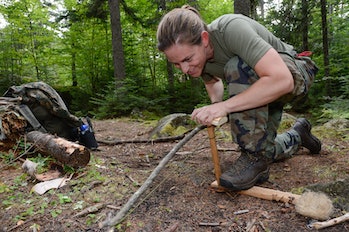 From not caring about going to space at all, to being selected as part of the first astronauts to go to the Moon in more than 50 years, Mann has come a long way in her relatively short career as an astronaut.

Since being chosen for the Artemis Team, Mann and her colleagues now train day in, and day out, for the journey to the Moon.

“It’s busy, it’s pretty diverse, and you wake up excited every day for the cool things that you get to do,” Mann says.

As part of their preparation to go to the Moon, the Artemis Team works on refining the spacecraft which could take them there. This includes drilling down on the procedures they will need to follow to fly the craft and stay safe on the journey, as well as how to land safely on the lunar surface. They also need to practice the science experiments they hope to conduct on the lunar surface.

“How are we going take what the engineers have built, and now incorporate human beings into this amazing machine — which can be much more complicated than you originally think?” Mann asks, rhetorically.

To answer these questions, NASA can only prepare the astronauts so much. Ultimately, a lot will depend on the individual characteristics of each crew member. Mann and her team will need to keep training as if they are the chosen ones for a while yet, however.

NASA plans to put the astronauts through more specific training in preparation for the journey, and place them under pre-flight restrictions just 18 months ahead of the scheduled 2024 launch. For now, Mann and the astronauts are learning how to take care of their bodies in space — how to eat food, use the restroom, sleep, and live in a microgravity environment.

Doctors, scientists, and former astronauts are also helping to prepare them for the mission, Mann says.

As 2024 approaches, the astronauts will conduct test flights — critical trials of whether what they have learned on the ground can help them survive and thrive in space.

“We are going to learn a lot,” Mann says. “You may come up with the perfect plan here on the ground and the perfectly designed solution, but you will still learn something in space.”

Up there, she says, “things will not always work perfectly.”

As much as Mann wants to leave her footprints on the Moon, she also recognizes the bigger picture of the mission as a whole. 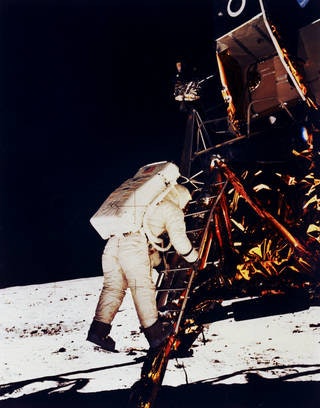 “Yes, you want to be the first person to walk on the Moon, you want to fulfill that role, but really it’s not about you,” Mann says. “It’s about the bigger mission, so you’re just excited to support in whatever role you can.”

It has been more than 50 years since humans landed on the Moon, and this time our species is going back with more advanced technology than ever to probe the lunar surface. Ultimately, we hope to discover the origin story of our natural neighbor, as well as our own.

NASA hopes to establish our presence on the lunar surface, starting with Artemis. The agency hopes to build a lunar base on the Moon for sustained exploration and development. The lunar base may one day help humans reach further destinations like Mars and beyond.

Mann feels the weight of that legacy for future generations, especially when she goes to talk to children in schools as part of outreach for NASA.

“You can see their eyes light up,” Mann says.

“You can tell their brain is clicking and thinking and they have such incredible questions. It just gives you such an incredible perspective on life — they’re filled with excitement and wonder.”

“That’s what we all need, especially right now,” she says.

In a move that will likely reconstruct the stage of space science and geopolitical affairs on Earth, officials for Russia and China have announced that they are working together to develop a space station on the Moon, in its orbit, or both.

NASA’s Hubble Space Telescope has orbited Earth for more than 30 years — and it is showing its age. This weekend, it hit a stumbling block it’s yet to emerge from.

You could go to the Moon… maybe. If you win the proverbial golden ticket, that is.