When you think of classical music, you might imagine a tune from Beethoven’s “Moonlight Sonata,” or one of Mozart’s piano concertos.

These works are considered foundational to the European classical music tradition, but in truth, the fundamentals of music predate these masterpieces by thousands of years. Our modern fascination with music is embedded in cultural practices honed over millennia, but due to the paucity of written records, it is difficult to know what this music would have sounded like to our ancestors’ ears.

Now, thanks to new research, you can listen to some of this ancient music for the first time in almost 18,000 years.

What’s new — In a study published Wednesday, in the journal Science Advances, researchers re-examine an 18,000-year-old conch shell, which has gathered dust for almost a century in the Natural History Museum of Toulouse, France. 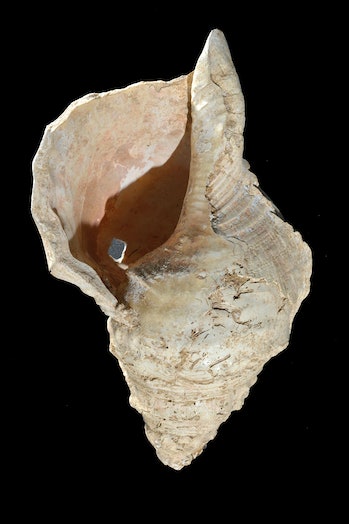 The shell is an artifact of the prehistoric people who once lived in the cave of Marsoulas in southwest France, where the seashell was originally discovered in 1931. In the new study, the researchers reveal these ancient peoples had modified the conch so it could produce beautiful music.

Listen to the conch shell’s haunting song — played for the first time in millennia:

To understand the context around this incredible re-discovery, Inverse spoke to study co-authors Carole Fritz, senior scientist at the French National Centre for Scientific Research, and Gilles Tosello, researcher at the Research and Study Center for Prehistoric Art at MSHS Toulouse. They recall first hearing the conch’s music as a breathtaking moment:

Here’s the background — The Marsoulas cave contains archaeological traces of the Magdalenian people of the Pyrenees, who lived during the Upper Paleolithic period, some 18,011-18,261 years ago. 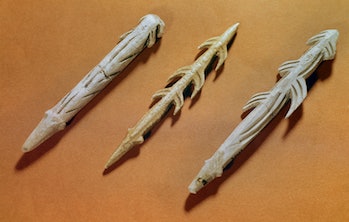 These traces include not only the conch shell, but also spear fragments, and cave art, which these researchers have been studying for 20 years.

“We have deciphered a large number of animal — bison, horses, ibex — and human figures, geometric signs,” Fritz and Tosello say.

The researchers weren’t able to date the age of the conch directly, however other evidence in this cave suggests the conch was used by these ancient peoples to make music approximately 17,500 – 18,000 years ago.

Essentially, the researchers made a best-guess of the conch’s age based on carbon dating of coal and bear-bone fragments in the cave, which were around 18,000 years old.

“These dates are consistent with the data provided by the archaeological material discovered during the excavations and with the cave art,” the researchers add.

The specific conch species used here is known as C. lampas, in the Charonia family. It is the shell of a large marine snail, which dwells on rocky ocean bottoms in the Bay of Biscay and off the coast of Spain. 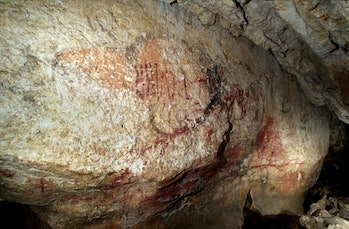 How they did it — The researchers were able to conduct much of their research visually, by examining the shell, which they discovered contains indicators of unnatural modification.

It seems an ancient music maker removed six spires on the conch, creating “a rounded opening with irregular edges.”

Due to the shell’s robust strength, researchers thought it was unlikely this damage occurred naturally in the ocean — rather, it was artificial.

Beyond the extreme modifications, the researchers also found a brownish organic compound on the shell, which the researchers hypothesize was used to attach a mouthpiece to the conch’s apex hole, much like a reed to a saxophone. 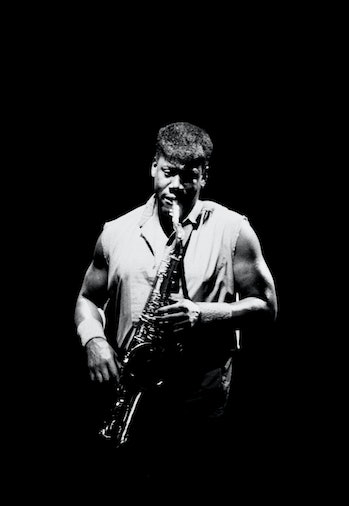 The conch shell also features external markings — red pigmented dots — an aesthetic match to similar red dots found in the cave’s paintings. This suggests these ancient peoples liked to decorate their instruments — a precursor to the rhinestone-encrusted guitars and painted flutes of modern musicians today.

The colors on the shell were too weak to analyze fully, the scientists used fluorescent X-ray technology to assess the cave paintings themselves.

But the real fun came when they presented the conch shell to a musician who specializes in wind instruments. The shell contains a conical section known as the Archimedean spiral, which functions musically like a French horn. 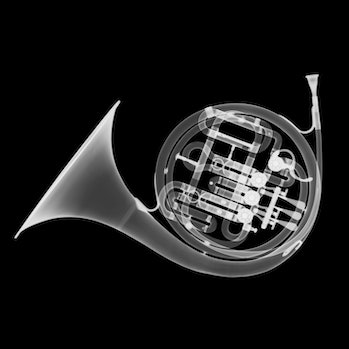 The modern musician then played the conch shell as it had been intended by the ancient cave people. And it was mesmerizing.

How they did it — “To play the shell, the musician vibrated his lips in the manner necessary to play the trumpet or trombone,” according to the study. The vibrations then enter the conch tube, “causing the air to vibrate according to the acoustic impedance of the tube.”

Based on how the musician vibrates or purses their lips, they could choose the specific frequency of the vibration, altering the note.

“In a way, it’s a bit like we can hear the ‘soundtrack’ that accompanied the pictures painted on the walls,” Fritz and Tosello say.

The musician produced three distinct, vibrant notes at a frequency of 256, 265, and 285 Hertz. The musical notes fell closest to what we would perceive as C, C sharp and a D.

The musician speculated that the prehistoric cave people likely played the shell with a mouthpiece to cleverly avoid injury.

Why it matters — These findings cannot be understated: This is the oldest known conch shell horn in Europe — and perhaps the entire world.

“It is the oldest conch because it is — to our knowledge — unique in Europe. It was discovered during excavations in 1931 made in front of the Marsoulas cave on behalf of the Smithsonian,” Fritz and Tosello note. 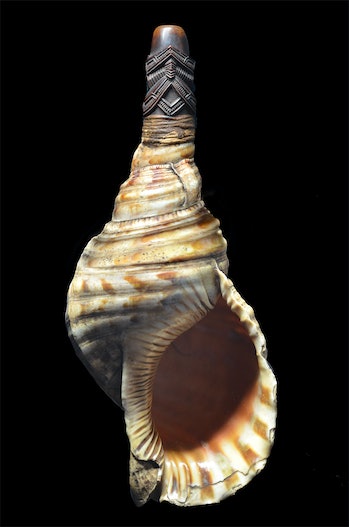 The findings speak to a global musical tradition, shared across disparate cultures. Both prehistoric and modern-day people in countries ranging from New Zealand to Japan have regarded conch shells as significant cultural artifacts due to their musical qualities.

Based on their discovery that the ancient people in the Marsoulas modified conch shells to play music, the researchers hypothesize the conch suggests the importance of music in their rituals.

The study states, “This seashell horn, with its unique sonority, both deep and strong with an enduring reverberation, sheds light on a musical dimension until now unknown in the context of Upper Paleolithic societies.”

Per the study: “This is the first time that a symbolic link is attested between an ornate cave and a musical instrument.”

In both past and present, the conch shell endures as a powerful symbol of the ocean.

“This shell is also a powerful symbol of the ocean, which lies to the west of the cave, towards the Cantabrian coast,” Fritz and Tosello say.