Hyperloop, the futuristic transport tube, has yet to make its debut on a full public track — but it’s already headed to one of the United States’ most iconic museums.

The vacuum-sealed pod transit system, outlined in a 2013 white paper by Elon Musk, is set to feature in an upcoming Arts and Industries Building exhibition themed around the future, Inverse can reveal. Visitors to the Smithsonian’s Futures exhibition, which starts in November 2021 and marks the institute’s 175th anniversary, will see Virgin Hyperloop’s Pegasus XP-2 pod up close for the first time.

The two-passenger pod made headlines in November 2020, when it hosted the first public passenger tests for the transit system. The test, held at the 500-meter (1,640 feet) DevLoop track in the Nevada desert, saw the pod accelerate to around 100 mph before slowing down. The trip lasted a matter of seconds, but CEO Josh Giegel told Inverse at the time that the trip was an “emotional” moment.

The pod in a pneumatic tube only moved as fast as a speeding car, but the test could pave the way for a new mode of transport. Virgin Hyperloop is aiming for pods that can hold 28 passengers, moving at speeds of up to 670 mph. A trip from Washington, D.C. to New York City, currently a four-hour drive, could take as little as 30 minutes.

Josh Giegel, co-founder of Virgin Hyperloop and CEO as of last month, tells Inverse that the Smithsonian news is “humbling and inspiring.” Giegel and Sara Luchian, director of passenger experience, rode on the XP-2’s first passenger trip on November 8, 2020. 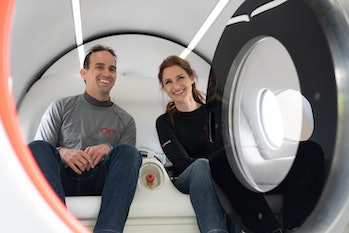 “This ability to say, we started a company a little over six years ago in a garage and built a new technology that people are really excited about … and then to have that be recognized in that way and have it be etched in history,” Giegel says.

We asked Giegel what sort of design changes we could see for the final hyperloop pods, and his answer revealed a bold vision for how Virgin Hyperloop wants to tweak its transport system. Don’t miss the second part of our interview, coming soon only in Musk Reads+.

The free exhibition, which will run from November 2021 until July 2022, will be hosted in Washington, D.C.’s Arts and Industries Building. It will temporarily re-open the building for the first time in 17 years. Futures will ask visitors to imagine multiple possible futures with a mix of art, design, technology, and history. The exhibition, designed by architect David Rockwell and his Rockwell Group firm, will cover almost 32,000 square feet and feature installations, experiments, inventions, and more.

For those keen to go straight to XP-2, it will be in the West Hall as part of the Futures That Work section. This area will focus on solutions for sustainability and a more equitable world.

Giegel says that discussions with the Smithsonian started with its original pod. The firm had set a public speed record with the XP-1 uncrewed pod on the DevLoop track in December 2017, reaching a speed of 270 mph. In August 2019, Virgin Hyperloop took the XP-1 on a roadshow across the United States.

In October 2019, while Geigel was in Washington, D.C., the Smithsonian team asked him to come by and take a look at the Arts and Industries Building. That sparked talks about getting Virgin Hyperloop involved in the Futures exhibition.

“So you’re talking about all these different things that could be in it, knowing full well that once we had this successful test that it was going to be the star of the show,” Geigel says. “Once we did the test, they were thrilled beyond belief. They were like, ‘Oh, this is even better than we could have ever imagined.’”

Following the test, Virgin Hyperloop released a concept video in January 2021 that showed how the hyperloop could work in the future. Like the XP-2 pod itself, the concept video featured designs from Bjarke Ingels.

This summer, the XP-2 pod will start traveling from the DevLoop site over to the Smithsonian. Visitors will be invited to look around the pod in 360 degrees and peer into its interior.

Giegel says his view is that the exhibition would invite visitors to pretend they’re in 2060, viewing artifacts from 2040. But with the backdrop of the Covid-19 pandemic, the exhibition could feel decidedly 2020.

“I think there’s a lot of opportunity when you’ve got, I’ll say, times of crisis or times of turmoil to really kind of reevaluate what matters,” Giegel says. “What I’ve observed over the last almost a year at this point, is people still care about wanting to be with each other.”

Virgin Hyperloop is aiming for safety certification by 2025, and commercial operations by 2030. Giegel confirms that this is “roughly speaking” still the general timeline. The aim is to start with smaller routes and build onto the ends over time. 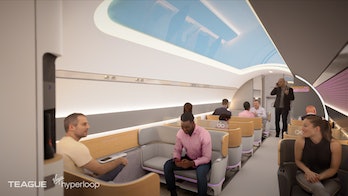 “As we see growth, we’re probably talking a number of routes at different spots around the world by the end of this decade,” Giegel says. “And certainly by the end of the next you’re starting to see quite a bit of national networks.”

Toward the end of the interview, Giegel shows Inverse a photo of himself, his mom and his sister on a tour of Washington, D.C. in 2002. The photo shows the 17-year-old Giegel the summer before he went to Penn State University to study mechanical engineering.

“That’s when I was really becoming more and more and more interested in the engineering aspect of things,” Giegel says. “My dad and I spent a couple of days, to my mom and sister’s chagrin, in the Air and Space Museum.”

As a relatively new father — his son is two years old — Giegel has been thinking “quite a bit more” about how kids may be inspired by the exhibition, and how they may try to contribute to hyperloop themselves.

“Hopefully at some point there’ll be a couple of kids, like I was maybe 20 years ago, going in and looking at this and getting inspired to do something big when they’re grown-ups,” Giegel says.

For those kids, he has an important piece of advice: “be bold, be persistent…and just keep your eye on the goal.”

“Find what excites you, and then be absolutely persistent at going after it,” Giegel says. “Everything in the Museum, everything in the Futures exhibit is going to be things that people said there’s no way it’s ever going to happen. And if this truly is a museum of the future, then we’re looking at…basically fortune telling, which I think is tremendously exciting.”

SUBSCRIBE TO MUSK READS+, A PREMIUM NEWSLETTER THAT COVERS THE WORLDS OF ELON MUSK, SPACEX, TESLA, AND EVERYTHING BETWEEN.

Volkswagen takes on Tesla and Virgin Hyperloop’s pod is going on a trip. Who is the world’s richest person? It’s the free edition of Musk Reads #236 — subscribe now to receive two more editions later this week!