Simon and Marie de Brienne were the 17th century’s most active postmaster and postmistress, delivering personal and political letters alike across Europe. But the Briennes also had a secret.

In addition to delivering letters, they stored away for thousands of “dead letters” — the typically discarded letters belonging to recipients who couldn’t pay postage. Rediscovered in 1926, the Brienne’s trunk is the final resting place of over 5,000 letters. Nearly half have never been opened for fear of destruction.

Now, using X-ray microtomography instead of a letter opener, a team of scientists has opened one of these letters for the very first time and demonstrated their pioneering new system on four letterpackets from Renaissance Europe.

Why it matters — This system gives scientists a powerful new tool for accessing the daily-lives of Renaissance people and for better understanding what the personal, professional, and political pressures of the day might have been like.

It also offers scientists an opportunity to explore one of history’s ancient security measures, a “letterlock.” This is an early, physical predecessor to today’s modern cryptography.

The research was published Tuesday in the journal Nature Communications.

Here’s the background — Long before the invention of email, or even bitter-tasting lickable envelopes, Renaissance correspondents had to think more creatively about the safety of their epistolatory works. One way that these letters were kept safe, write the authors, was through intricate, origami-like letterlocks.

“Before the proliferation of mass-produced envelopes in the 1830s, most letters were sent via letterlocking, the process of folding and securing writing [materials] to become their own envelopes,” the authors explain.

“Letterlocking was an everyday activity for centuries, across cultures, borders, and social classes, and plays an integral role in the history of secrecy systems.”

The authors write that in their study of 250,000 letterlocked messages (beyond the Brienne haul) from the “Renaissance world,” they discovered a spectrum of security systems, ranging from simply sealed to booby-trapped letters with tamper-evident locking mechanisms to deter “man-in-the-middle” attacks.

In other words, a mechanism that would secretly signal to the recipient if others had snuck a peek at their secret writing. 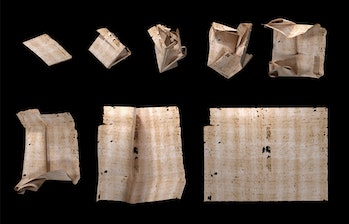 While previous research has developed X-ray methods to unfold single or even double folded letters in the past, this team set out to design a method that could be used universally on these intricately folded letters and access these at-times 300-year old writings without ever breaking their seal.

What they did — To do this, the authors write that there is a five-step system:

Using this approach, the team was able to virtually unfold the sealed letters and even read their contents thanks to the different signatures given off by the chemical composition of the ink and the paper it was written on.

What they discovered — A striking discovery made during their research was the successful virtual unfolding of a never-before-opened letter from July 1697 from Frenchman Jacques Sennacques to his cousin Pierre Le Pers requesting a certified copy of a death notice for one Daniel Le Pers.

“Before computational analysis, we only knew the name of the intended recipient, written on the outside of the letter packet,” write the authors.

As these “dead letters” were often never delivered due to either insufficient postage or the death of the recipient, one can wonder if Pierre Le Pers joined Daniel before receiving this final postage.

While the contents of this letter weren’t necessarily world-changing secrets, the authors write that the success of their approach could be used in the future to unlock even more long-forgotten secrets from this era.

The letters, quite simply, are also difficult to read — despite being technically legible. The study authors note that the “idiosyncrasies of a hand” can make it difficult to determine the actual context of letters; paleographers have to use contextual clues and linguistic knowledge to fill in when text is messy or missing. Other times, wormholes have made it impossible to determine a word.

Overall, letters of the Brienne Collection were sent some time between 1680 and 1706. Virtual folding, the study authors argue, allows them to conserve the cultural heritage of this time period. 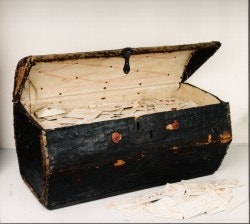 What’s next — In the future, the team says that researchers should focus on improving the robustness of their technique so it can be used on different writing mediums as well as letters that may have begun to deteriorate with time and become warped.

Ultimately, they’re excited for how a method like this could reveal the contents of ancient letters within hours — a process which would have taken decades only a handful of years ago.

Artificial intelligence has flexed its computational prowess in recent years by besting humans at games of smarts like the Go or even on the game show Jeopardy!

Do you take your lab-grown steak medium-rare or well-done?

A small rock found in the Saharan Desert may hold clues to our early planetary system and how the Earth was formed.