However, the U.S. dietary guidelines — nutritional advice published every five years by the Department of Agriculture and the Department of Health and Human Services — recommend “core elements” of a healthy diet that include dairy and various proteins.

Therein lies the BBQ rub. According to a study published Monday in Nutrition Journal, these guidelines may be helpful for the body — but they’re not great for the planet.

Diego Rose, a co-author on the study and Director of Nutrition at Tulane University’s School of Public Health & Tropical Medicine, tells Inverse the study suggests the U.S. government needs to rethink its approach to diet.

“Human food systems are a key contributor to climate change, so it’s irresponsible for governments to produce dietary guidance without considering their impact on the environment,” Rose says. 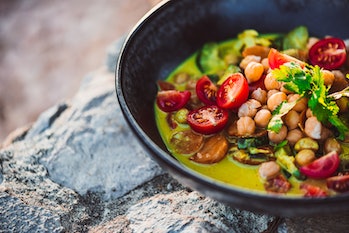 By and large, plant-based diets are much better for the environment than animal-based ones.

For example, CarbonBrief analyzed data comparing plant-based “Impossible” meat and “Beyond Burgers” to beef burgers. The carbon footprint for the plant-based burgers was 20 times smaller than the beef burgers.

Recently, researchers have suggested adapting the Mediterranean diet — a favorite for its health benefits — to be more “green” by cutting out red meat and increasing plant intake.

This study dives into this question, finding what’s best for the environment doesn’t always align with what governments say is best as a diet.

According to the study, the livestock industry accounts for around 14.5 percent of total global manmade greenhouse gases.

Red meat, like beef, has a particularly devastating impact, emitting up to 60 kilograms of carbon dioxide per kilogram of meat consumed.

Food systems account for up to a whopping 29 percent of global, human-produced greenhouse gas emissions, according to Rose and his colleagues.

(For more information on how diets impact climate change, you can read the EAT-Lancet’s report, which focuses on how best to feed a global population through sustainable diets.)

The high carbon footprint in the U.S. can largely be attributed to the higher amounts of protein — especially animal-based protein — and dairy in the recommended guidelines. Dairy and animal meat both contribute significantly to greenhouse gases.

For example, the U.S. dietary guidelines recommend more than twice as much protein as India and six times as much dairy as Oman.

How they did it — While prior research has focused on the environmental impact of a single country’s dietary guidelines, researchers in this study wanted to compare the impacts across countries.

They chose seven countries with a variety of dietary habits: Germany, India, the Netherlands, Oman, Thailand, Uruguay, and the United States.

They acquired the countries’ specific dietary guidelines, using supplementary data from the UN Food and Agriculture Organization to calculate the consumption of specific food groups within each country.

The researchers then calculated the greenhouse gas emissions from each dietary guideline, assuming a 2000-calorie diet. 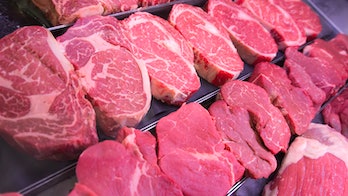 Digging into the details — The research isn’t without its limitations, however.

For example, greenhouse gas is the only factor considered in this study, but other sustainability issues — such as land use — don’t receive consideration.

Through their study, the researchers also addressed another dilemma that had been puzzling sustainability experts and nutritionists.: In prior research, nearly every country reduced its carbon footprint when diets shifted toward the recommended national guidelines — except for the U.S.

By breaking down the unsustainable elements of the standard (non-vegetarian) U.S. dietary guidelines, the research team in this study effectively resolved that puzzle.

Why it matters — The numbers don’t lie.

That number is expected to rise as the global population grows to an estimated 9.8 billion people by 2050, especially as urbanizing countries consume more meat and less plant-based products. The study authors write:

Therefore, the study suggests it will be paramount for “governments to promote diets that are both nutritious and sustainable and incorporate these recommendations” into specific policies. Some countries, like the Netherlands, are already doing this.

This is especially pertinent in the U.S., considering its outsized impact on greenhouse gas emissions. The U.S. ranks second only to China in terms of its carbon dioxide emissions.

What’s next — For his part, Rose has one specific request for countries, specifically, the U.S: change your guidelines to incorporate sustainability.

Unfortunately, a lot of politicking goes into these guidelines, and incorporating sustainability was a challenge during the previous administration, which routinely downplayed the effects of the climate crisis.

“Our current guidelines [2020-2025] do not include mention sustainability, and it was intentionally excluded from the previous version by the government, despite significant discussion of it by the expert committee,” says Rose.

Rose mentions that the U.S dietary guidelines get revised every five years, through a joint process between the US Departments of Agriculture and Health and Human Services, which seek out expert opinions. As it turns out, the set of guidelines are being developed very soon, according to Rose.

“There is plenty of opportunities to include sustainability in this process,” says Rose.

In 2012, when Colorado and Washington became the first two states to legalize marijuana for recreational use, cannabis users everywhere rejoiced. Legalization continues to spread across the United States, with Virginia becoming the latest state to embrace pot.

Do you take your lab-grown steak medium-rare or well-done?

Rotten food scraps and vats of sewage typically do not make the cut when it comes to the list of what makes a glamorous, jet-setting lifestyle. But researchers say that transforming these otherwise discarded “wet waste” materials into biofuel could be the future of environmentally friendly flying.