Back pain comes for us all, whether or not you lift weights.

Sitting all day and getting a tight back feels as much like a standard feature of life as pulling a muscle trying to exercise that stiffness away. An estimated half a million people get lower back surgeries annually, and over $11 billion is spent on surgeries relieving back pain. The treatment market is robust as well, with all manner of drugs designed to overcome chronic lower back pain. There’s also a cottage industry of back pain-specific items, from sneakers to furniture to entire furniture stores with funny names, like Good Vertebrations, which admittedly is just a store on Seinfeld, but should exist.

But for such a widespread phenomenon, back pain is pretty unclear: The term itself is needlessly vague, its causes and symptoms are muddied, and the variance of advertised treatment choices can contradict each other, and be confusing for a lay population.

There are more than a few types of back pain, and more gradations therein that can be defined in this column. (If your back pain has internal complications, like bowel problems, or if it lasts for several weeks, goes to your legs, or doesn’t improve after serious rest, you should put down the iPad and go see a doctor.) But even with this variability, the term back pain is mostly used as a shorthand to describe the most immediately relatable symptoms — tightness, soreness, inflexibility, burning — in one part of the body.

When we say back pain, we think of lower back tightness, or worse. But even this type of specific pain can have any number of causes — from a pulled muscle to an inactive glute to a herniated spinal disk — and so the term back pain is in need of a re-definition.

Interchanging the words back pain with lower-back tightness creates issues. Dr. Stuart McGill, a leading expert on spine biomechanics and a professor emeritus at the University of Waterloo in Ontario, tells me there’s “no such thing as non-specific back pain.” He contrasts the term with “leg pain” — “Have you heard of non-specific leg pain? ‘Could you give me an exercise for leg pain’ – the answer is no.” It makes sense.

McGill, who also trains clinicians in diagnosing back pain issues, puts clients through what he calls “postures, movements and loads,” like stretching or lifting a weight, and determining which are tolerable and which provoke symptoms. These assessments take back pain diagnosis from general to biomechanical, and by isolating the problem, can offer a movement-based escape from it. The alternative — prescribing painkillers to get rid of nagging, vague back pain — seems misdirected by comparison.

We’ve noted 6 strategies to help fight back pain below. Three are physical, and three are mental.

Once back pain is specified, individuals can build up their work capacity and what McGill calls “spine hygiene.” Treatments vary depending on where the specific pain is, and much of McGill’s specific testing assessments are found in his book.

For many people, he recommends three exercises to help build help spinal stability:

McGill also says “movement hacks” like hip-hinging and lunging, as opposed to bending over, help take the stress off the back and create better spine hygiene. 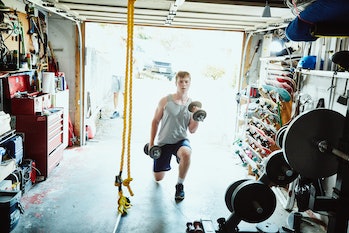 Other approaches that specifically deal with pain can also be helpful.

The work of Dr. David Hanscom, an orthopedic spinal surgeon turned author, re-casts back pain as both a muscular phenomenon and a neurological one. The pain begins as a muscular problem, but, being transmitted through nerves, “gets embedded as a neurological problem,” he told Yahoo! News. (Psychologist Robert Gatchel, meanwhile, refers to a “constant interaction” between neurological and muscular pain; the silver lining is that treating one might help with the other.)

Hanscom also takes a metaphysical approach to pain, laying out habits to help deal with pain.

4. Writing a pain journal then ripping it up

5. Meditating and not venting

These habits — all of which are drug-free — suggest pain is a neurological feeling more than a real thing that exists in the back. Whether adopting these habits are enough to stanch surgery is a matter not for this column — though it has worked for hundreds of his patients — but, even taken skeptically, Hanscom’s concepts are freeing, and proponents say they help.

That said, back pain is real pain, and often individuals’ backs hurt somewhere because of an imbalance or weakness in another part of the body.

Unlike most other bones in the body, which are long, the spine is what McGill calls “a flexible rod,” and would buckle if alone. It’s stabilized by its surrounding muscles, which work, McGill says, like guy wires — the ground-dug cables that hold up cell phone towers. Poor posture — say, craning your neck to look at your phone — forces more load on these muscles. (According to McGill, craning your neck forward can make a 10 lb. head feel like 30.)

Other deleterious movement patterns, like sitting down for long amounts of time, can be negative as well — though McGill notes sitting for a short amount of time can be relieving for folks who are on their feet. The logic is that putting the spine under stress, by way of poor posture or bad movement patterns, overworks the muscles in the back to their “tipping point,” and leads to pain.

It all seems to erase the line separating the gym from regular life. While we might think muscles get lifters through a workout, it’s really about work capacity: the body’s ability to be active, to recover and adapt. The more work capacity an individual has, the more “room” they have to lift, and, more importantly, do everyday chores, twist in the shower, or go on long hikes. Individuals with specific back pain that affects their movement have reached the limit of their work capacity.

Moving with bad posture — not staying stacked — is over time like squatting heavy, or often. It’s work. Bad posture, McGill explains, overloads certain body parts, which can end up being the site of pain. Building up abdominal and hip strength, spine stability, and maintaining good posture places less stress on our spine and its supporting muscles when we’re not at the gym. Even if we don’t work out, these muscles get used, which is why they need to be strong.

Building back your strength — Once work capacity is built up, building up back strength is a way to keep the pain away.

Dustin Jones, a trainer at Stronger Life, a Kentucky weight training community for seniors, trains his clients in mostly barbell lifts and kettlebell swings. Jones tells me after a month or two months of weight training — all supervised and controlled in a group setting — clients show marked improvements in strength and mobility. Longer-term clients have stayed in their houses longer, since “stairs aren’t a big ordeal,” anymore, thanks to improved leg strength. The lunges, squats, and deadlifts Jenkins programs for his cohort are the same ones elite lifters do. It’s counterintuitive to do these exercises with back pain — but the approach is one worth considering. As strength goes up, so does work capacity.

Strength, to be sure, is not everything — McGill cites several studies he’s undertaken of Toronto police officers who “trained harder, [and] were stronger but had more pain.” The best protocol, essentially, is the sweet spot of what McGill calls “sufficient athleticism” — not being weak, but not being so trained that you’re susceptible to injury.

“It’s nice,” McGill says, “to have athleticism and balance.”

While back pain can feel like a feature, it’s more of a bug. Combatting it doesn’t require you to become a lifter — or even a yogi — but it does require some muscles, good posture, and vigilance. The reorientation — from back pain as lower-back tightness to a discrete set of pain points, from our backs being in use only during deadlifts and squats to all parts of the day — is a big one.

The long-term solution of building up work capacity and taking a load off the spine, is work, too, but it’s the right kind. It shouldn’t feel like work to stand up straight and get through the day.

Leg Day Observer is an exploratory look at fitness, the companion to GQ.com’s Snake America vintage column, and a home for all things Leg Day. Due to the complicated nature of the human body, these columns are meant to be taken as introductory prompts for further research and not as directives. Read past editions of Leg Day Observer for more thoughtful approaches to lifting and eating.

Suffering from chronic pain can be both a debilitating and lonely experience.

Can a person who isn’t an athlete lift too much?

COVID-19 has hijacked people’s lives, families, and work. And, it has hijacked their bodies and minds in ways that they may not even be aware of.

The Immortal Hulk series has added a horror twist to the Hulk mythology, and the latest issue uses his immortality in the most grotesque way yet.