Tuberculosis once rampant in ancient Europe, for example, may influence the genetic makeup of some living people today. This is according to new research out of France, which focused on the rise and fall of a specific gene variant linked to a higher risk for tuberculosis.

The variant emerged more than 30,000 years ago, and nearly 2,000 years ago its frequency drastically decreased. The study suggests the variant was filtered out as those without it passed along their stronger genes — and those with it perished.

The study is suggestive of just how powerful some pathogens are, and how they shape and prompt genes to fight disease through natural selection.

What’s new — The study was published Thursday in the journal American Journal of Human Genetics. Knowing how illness can cause DNA to evolve can help scientists predict and treat modern diseases, the research suggests.

“We probably encountered many, many different pathogens over many, many years,” lead author Gaspard Kerner, a postdoctoral researcher at the Institut Pasteur’s Human Evolutionary Genetics laboratory in Paris, tells Inverse.

“But what were the ones that were really important for us, that really transformed us as humans?”

Here’s the background — Tuberculosis is the deadliest infectious disease in human history, responsible for the deaths of about a billion people in the last 200 years alone.

The bacteria behind it, mycobacterium tuberculosis, can penetrate deep into the lungs and can lead to symptoms like coughing, fever, chest pain, and night sweats.

It’s still around, but is much less common thanks to antibiotics, better standards of living worldwide, and as the study suggests, genetic evolution. 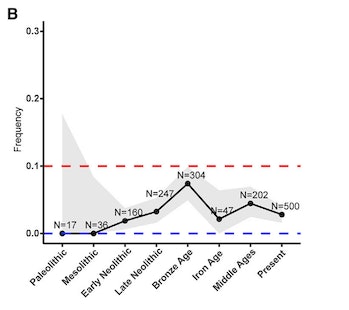 How they did it — This team took a relatively new approach to tracing a gene’s lineage, using a public database with genetic data pulled from human remains up to 30,000 years old. They also scanned the data for a gene variant called P1104A, known to be linked to TB susceptibility today.

They ran statistical analyses on P1104A to trace its frequency over the last 10,000 years and found that it took a plunge right around the time that infectious diseases like tuberculosis were likely to have increased.

With the advent of more agriculture and what resembled cities, European populations began to mix with one another and exchange goods and supplies. This may have led to the rise of new infectious diseases, Kerner explains.

Though there’s not enough evidence to say for sure if an epidemic of tuberculosis broke out, Kerner said there’s a good chance. Though the study of ancient pathogens to identify past epidemics is emerging, limited or inconsistent human remains, a lack of historical records, and complex interactions of pathogens with human DNA can pose challenges to pinpointing an outbreak in time. 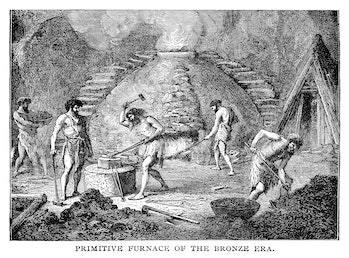 The variant, part of a protein-encoding gene called TYK2, is still found in 2.9 percent of people in Europe.

However, Kerner and his colleagues report it used to be in around 10 percent of Bronze Age Europeans. If not for this natural selection, the study suggests, many more people might have still had it today.

While the exact start of the Bronze Age changes depending on the region, in Europe it roughly spanned from 2000 B.C. to 700 B.C. The team hypothesizes the variant was relatively frequent during the Bronze Age but became less so in the Iron Age — likely after years of tuberculosis leading up to that point.

Why it matters — Studies like this one, which examine a known genetic link to disease and examine its history, also hold promise as a way of isolating gene variants that might relate to certain modern diseases.

If ancient DNA in a database showed a drop or increase at a certain point in time, it could pinpoint another variant that either protected or predisposed people to certain diseases, Kerner says. This, in turn, could lead to treatment.

“We know that pathogens are one of the major causes of human death still today, so of course, it’s always really important to know, which are the variants that are real indicators,” Kerner says.

Knowing what the variants or the genes are could allow scientists to “use some therapeutic approaches to actually develop a drug to cure a person that has a disease,” Kerner says.

What’s next — Genetic targets for treatment in modern medicine are crucial, according to Jessica Brinkworth, an assistant professor at the University Of Illinois Urbana-Champaign and an expert in the evolution of immunity and disease. Brinkworth is not affiliated with this study.

“Any variant that might be contributing to susceptibility or resistance to an infectious disease would be of interest in a comparative standpoint because it can help you find therapeutic targets for treatment,” Brinkworth tells Inverse.

Brinkworth gave the example of certain variants of a gene called APOE, which can signal a higher risk of getting Alzheimer’s disease. Though it’s not infectious, knowing who has it might serve as a warning for patients, and make it a target of interest for scientists developing drugs to treat the disease.

However, the Covid-19 pandemic likely won’t lead to a genetic shift like the one researchers observed in ancient genomes, Kerner says. Most people that die from Covid-19 are older and, unlike those sick with tuberculosis thousands of years ago, likely already passed on their genes to offspring.

“We are pretty lucky to be in an epoch where we have good hospitals and good treatments, so we avoid these deaths as much as possible,” Kerner says. “But if it affected younger people, that wouldn’t be the case.”

Polycystic ovary syndrome — as the name suggests — is a disease typically associated only with women, but it is time to think again.

Forests are vital. Their plants and fruits feed expansive ecosystems, subsequently supporting global biodiversity. They churn out the oxygen that fills our lungs. They’re even good for our mental well-being.