The microscopic roundworm, Caenorhabditis elegans, might be Earth’s secret superhero. These tube-shaped creatures, which thrive on rotting vegetation, may seem unremarkable at first glance. But this simple animal has benefited humanity in numerous ways.

NASA scientists are sending C. elegans to space to test the effects of muscle mass loss. They are categorized as the ideal “model organism” to study the development of disease and aging. At just 1 millimeter long, its transparent body allows scientists to examine fundamental cellular and molecular processes.

But scientists may have just unveiled another one of this organism’s superpowers. 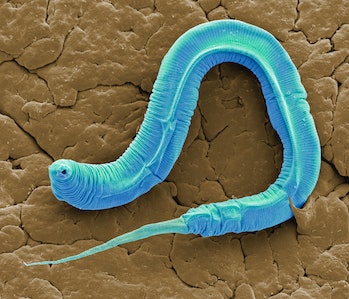 What’s new — A study published Thursday in the journal Science finds C. elegans can discriminate between colors despite the fact that they don’t have eyes or opsins — a colorless protein that reacts to light. The research was conducted by scientists at Yale University and the Massachusetts Institute of Technology.

Dipon Ghosh, the corresponding author of the study and a postdoctoral researcher at MIT, tells Inverse these findings suggests the “worms were sensitive to the color of light in their environment.”

How they did it — The researchers tested how these roundworms avoid a certain blue toxic pigment known as pyocyanin by using white light.

The researchers first tested whether a harmless blue dye, in combination with white light, would cause the roundworm to avoid the synthetic substance — similar to how it used white light to avoid the blue pyocanin.

“We wanted to understand which component of the blue pigment toxin pyocyanin – its color or its toxicity – was informing the worms’ avoidance,” Ghosh says.

“We could reproduce the effects of pyocyanin on bacterial avoidance with both a harmless blue dye and a clear, colorless toxin, but not either separately.”

The scientists wanted to figure out the meaning behind the roundworm’s biological responses. The difference in the roundworm’s response to the colorless toxin and the harmless blue dye gave the researchers the necessary information to continue their experiment.

“This result told us that the worms were assessing both the toxic nature and the color of pyocyanin when deciding to avoid their food,” Ghosh says.

The second step in the experiment involved modifying the white light to create a simulation of the toxic bacteria. Would the worms still avoid the simulated pyocyanin under these conditions?

“We wanted to see whether we could ‘simulate’ bacterial pigmentation by simply changing the color of the light. We got a blue filter that changes the color of the white light that we were using to a color more similar to the blue color of the pigment,” Ghosh says.

They exposed one set of bacteria to light filtered by color, and another to non-filtered light. The worms that received exposure to filtered light avoided the bacteria, but the other set of worms stayed on the bacteria. 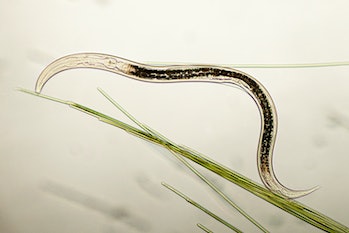 “This result told us that worms were sensitive to the color of light in their environment,” Ghosh says.

Finally, the researchers used two LED lights to heighten the stakes and confirm their findings: one blue and one amber. Amber was used in an attempt to replicate environmental light conditions.

“We found that even if we exposed the worms to the same total energy, worms avoided some blue-amber color mixes but not others,” Ghosh says.

This final step enabled researchers to confirm that roundworms can accurately discriminate between different colors, in turn helping them stay alive.

Ultimately, the team discovered C. elegans aren’t simply evaluating levels of brightness — they’re comparing the “rations of wavelengths,” Ghosh explains. They have the ability to discriminate between colors and use that information to make decisions, all without the benefit of eyes.

Digging into the details — Overall, the researchers discovered roundworms can discriminate between different colors, using white light to move away from blue-colored toxic bacteria.

The scientists also identified two sets of genes — chtl-1 and jkk-1 as well as F52H3.6 and lec-3 — that contribute to the roundworm’s avoidant responses to color, setting up the potential for future genetic research. 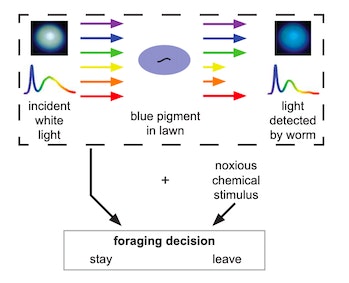 Why it matters — This roundworm’s color discrimination is no mere quirk, but an evolutionary gift, the researchers suggest.

“Our work also suggests that sensitivity to specific colors could offer some evolutionary benefit for the worm as it navigates an environment where it might encounter colorful microbes,” Ghosh says.

But Ghosh also believes the findings of the research go beyond roundworms, reshaping the way scientists think about the evolution of color discrimination. The work suggests opsins are not necessary for an animal to tell the difference between colors, for example. If opsins aren’t actually necessary to perceive colors, then we might need to expand how we define color sensitivity in other animals.

“Because it seems that worms have co-opted evolutionarily conserved genes for color sensitivity, we think our findings could generalize to other animals or even tissues that sense light, even if they don’t possess the classic molecules required for vision per se,” Ghosh says.

Microbial pigments might affect color perception in these other animals in a similar way to the roundworm, he adds.

“Perhaps microbial pigmentation can more generally affect foraging by wandering hosts other than C. elegans – meaning that colors might be involved in unexpected ways in other interspecies interactions as well,” Ghosh says. 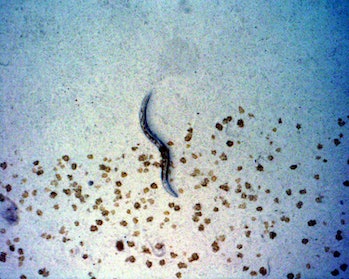 What’s next — The study raises exciting questions for future research.

Specifically, the researchers would like to better understand the link between different genes and color sensitivity.

Based on their current paper, these other genes could also possibly aid in foraging for food. Ultimately, this ongoing research will provide the stepping stone to understanding the evolution of color sensitivity in all living creatures.

“By better understanding color sensitivity in the worm, given that the genes involved could be evolutionarily conserved, we might find similar patterns and activities in other organisms,” Ghosh says.

Worms slither their way through dirt, over land, and in water. In fact, the tiny creatures can be found in nearly every habitat on Earth, even volcanic vents on the sea floor. Now they may have conquered space, too. 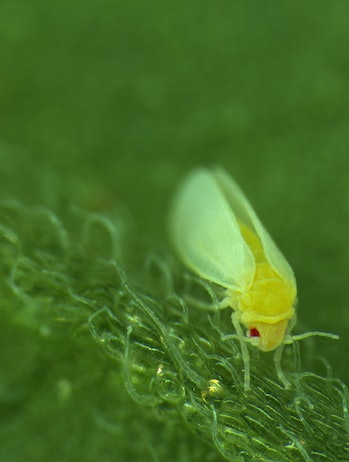 It’s the perfect premise for a science fiction movie.

Polycystic ovary syndrome — as the name suggests — is a disease typically associated only with women, but it is time to think again.